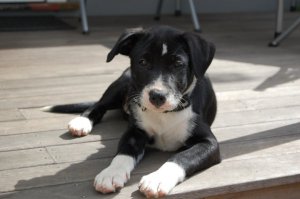 little ricco is the newest addition to the family, and came as something of a surprise. a flyballing colleague was working in a pound on the nsw far north coast, and posted about a family of border/staffies that had been abandoned there. the puppies were 10 weeks old and ready to be rehomed. the reason this is so significant is that in the united states, borderstaffies are bred especually for flyball, and the current world record holding team is a team of borderstaffies. they are ideal because they are short and light but powerful and smart and full of drive. so we just decided to go for it and grab one of the puppies. if it didnt work out, so be it. phone calls were made and a long drive to murwillimbah later, ricco came home to live. he is just lovely!

he was terrific from the start, affectionate, smart, well-adjusted, friendly. his name comes from our favourite coffee, ‘lavazza creme a gusto: gusto ricco’ (which you cant get in australia, i brought some back from italy with me).  loosely translated this means strong and rich flavour. weird name for a dog maybe, but it suits him. 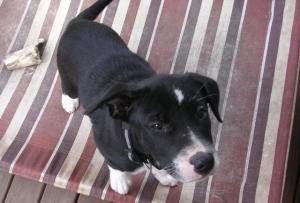 he has continued to blossom here; at nearly 6 months old he looks like being a long legged but short and muscly dog, learns very quickly, gets along well with other dogs, and loves to play with a tug rope! 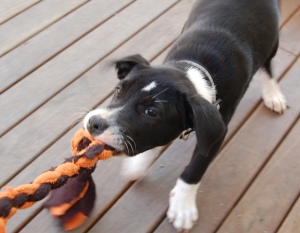 he is naughty and mischievious, like all good puppies, and has run off with some of my wool a couple of times: 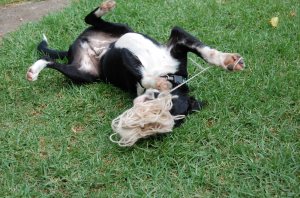 but he gets away with it because he’s so darn cute! he loves to be cuddled, has his favourite bean bag bed, chews everything thats not nailed down, plays with jem endlessly (who surprisingly plays back) and harrasses possum and her lovely tail.

she has taken to jumping up on tables to get away from him. its hard to tell yet whether he will be a top-class flyball dog, once he learns to run properly we will have a better idea, but so far i’m just glad he’s here.

One response to “ricco”